Re: Wikipedia falsely advertizes itself.

If Wikipedia actually was interested in what they boast in their mission statement, they would at least make the following changes:
Wikipedia's mission statement evidently is false advertising.

Wikipedia's mission statement is a bunch of baloney. The best they could do is delete the damned thing and replace it with this: 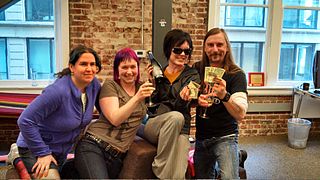 badmachine wrote: ↑
Tue Apr 14, 2020 10:59 pm
Wikipedia's mission statement is a bunch of baloney. The best they could do is delete the damned thing and replace it with this:

I should note that ALL of those people no longer work for the WMF.

Kat Walsh is now a member of the Free Software Foundation board, Leslie Carr works at Quip, and Brandon Harris works at something called Joingo.

During the upheaval of this past spring, the site went from closely watched to the subject of outright voyeurism.

In April, Ms. Angwin was fired. In a letter to Mr. Newmark, the Craigslist founder, she accused Sue Gardner, the executive director and a founder of the site, of ousting her as part of Ms. Gardner’s desire to adopt a tone of frank advocacy against the tech industry. Ms. Gardner disputed that, arguing that there had been problems with Ms. Angwin’s leadership. As Ms. Angwin noted then, most members of the staff followed her out the door.

A month later, on the Friday before the Memorial Day weekend, Mr. Newmark wrote on Twitter that Ms. Gardner and The Markup’s third founder, Jeff Larson, a data journalist who joined the site from ProPublica with Ms. Angwin and succeeded her as editor in chief, had departed. Neither Ms. Gardner nor Mr. Larson replied to requests for comment.

Wikimedia is A VAST RIVER OF MADNESS, and the staff is in a state of constant turnover. Jimbo built a madhouse. And NONE of those people will admit it publicly, given that they all used their WMF time to boost their miserable little careers. AND THEY SPREAD THEIR ERRATIC BULLSHIT TO OTHER ORGANIZATIONS.
Top

While I very much like the idea of free (as in: open-source) software, I've never understood what the FSF does. All I see is just like the WMF: lots of talk about nothing. Seems reasonable that a WMF staffer found her way there (and nowhere else...)
#Bbbgate
Top

Hah. Like a lot of MIT/Harvard associated nonprofits, I suspect the FSF mainly exists to provide gainful employment for the more questionable members of the tech community. Another of them being Brad "The Cunctator" Johnson, one of Wikipedia's earliest crank admins and major Jimbo asslicker.

There was a rumor that Kat Walsh was working behind the scenes last year to purge Stallman, one of the FSF founders, over that sexual-harassment business. He deserved it and it's only a rumor, but it sounds an awful lot like a typical Jimbo-move. Could go on and on about Stallman. For 30+ years people knew he was batshit wacko--but they still treated him like a "hero of open source blah blah".

And you folks wonder why Bbb23 is allowed to run wild on WP servers?
Top

I could add something to Crow's comments, although I refuse to post it on a Vigilant-infested area.

In short, Wikipedia has a published privacy policy, it dictates how and when CheckUsers may access personally identifying information, and if all the facts were known, I should think it obvious it could be proven that their failure to ensure Bbb23 stuck to the policy, was the result of negligence and had material harm. Shit, publish a few select emails from his buddies, I bet you could even prove it was "knowingly and willfully".

Dude is a straight up fucking criminal, they know what he did, they know his details, they won't release his details to us as concerned citizens, which makes them accessories after the fact, under Penal Code 32PC.

Hopeless. Checkuser has been abused so many times that most of their checkusers, past AND present, should be jailed. It hasn't happened and I seriously doubt it ever will. David Gerard committed epic abuses, including the flat-out "doxxing" of several folks; and no one's ever sued or arrested him (that we know of).


Randy From Boise wrote:Try to aim the piss stream out of the tent, not inwards.

So you can have a drink, I'm guessing?
Top

Bbb23 uses a script to mass-rollback all editors of a user, see https://en.wikipedia.org/wiki/User:Bbb23/common.js .

That's the only script that he uses... quite telling.
Some admins use dozens.
#Bbbgate
Top

You know there's a serious problem when he "quits", but keeps logging in--to delete criticisms on his talkpage. What a little turd.

ericbarbour wrote: ↑
Sun Apr 19, 2020 3:50 am
You know there's a serious problem when he "quits", but keeps logging in--to delete criticisms on his talkpage. What a little turd.

He could put up a banner

This page is censored per wikipedia's policies, don't even try to say a negative comment.

He should be rewarded the "Barnstar of whitewashing".
#Bbbgate
Top

Ironic thing is, I wrote the original version of that script back in about 2010. All writ keeper did was copy it when I got banned.
#BbbGate
Top
Post Reply
228 posts