You can talk about anything related to Wikipedia criticism here.
Forum rules
Post Reply
37 posts

AndrewForson wrote:It might pose a threat to Wikipedia, but only by being an even bigger threat to the whole concept of knowledge than Wikipedia is already: by being like Wikipedia, only worse in every respect. There is no single way in which Everipedia is more likely to produce a reliable compendium of human knowledge than Wikipedia, and some in which it is much less so. Foolish or even futile though the standards of Wikipedia may be for inclusion of topics and sources, Everipedia is much much worse. It proposes to pay people in cryptocurrency with no obvious model for where the real value backing that currency will come from: that payment will have apparent value precisely until there's a serious attempt to spend it, and then it will be revealed as a bubble. Fortunately the whole enterprise is so inept and misguided that it is most unlikely to gain any traction. I'm astonished that Larry Sanger should choose to be associated with it.

There's no apparent value behind Bitcoin but it's still worth thousands of dollars.

Plus you can cash out anytime and spend IQ points in your local currency. There's an exchange dedicated to EOS projects called Chaince that I recommend, where you can see the price of the IQ token in EOS (which you can exchange for local currency).

Along with earning rewards by editing, if hypothetically you were to buy $1000, at time of writing is 0.0034 EOS ($0.027) or less if you can get it now the market's stabilized a bit, and then thousands of people join up in the next week (or months) and start writing thousands of new, quality articles, that price might moon up to 0.01 EOS ($0.08) and you would have made $2,723 profit from trading.
Wikipedia Sucks! Everipedia doesn't and you can get paid! https://everipedia.org/wiki/lang_en/paul-bedson/

Ah, yes, here it comes. Why don't we just buy a few of the cryptocoins for dollars. If the price triples blah blah bitcoin blah blah thousands of dollars blah blah.
Top

AndrewForson wrote:Ah, yes, here it comes. Why don't we just buy a few of the cryptocoins for dollars. If the price triples blah blah bitcoin blah blah thousands of dollars blah blah.

It was a hypothetical, I am not trying to sell. It's just a parable for information and an example of how the financial rewards from trading also motivate the community. Everipedia's blockchain version isn't going to be quite as simple as getting an account by passing a captcha. You need to know how to buy bitcoins on coinbase, know what EOS is a bit, exchange them and set up a couple of different types of wallets. It's not exactly grandma friendly but there's plenty that are figuring it out and will figure it out.

This is trying to sell... 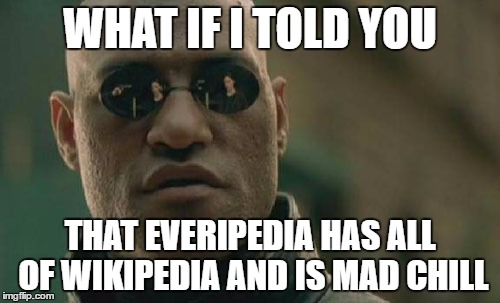 Wikipedia Sucks! Everipedia doesn't and you can get paid! https://everipedia.org/wiki/lang_en/paul-bedson/

The Quicksilver tool goes a very long way to proof of concept of much of the necessary tech for the proposed Wikipedia killer.

If these guys are genuine about their commitment to helping, not destroying, Wikipedia, then I'm sure there will be other megarich corporations who spot the opportunity here.

The weak link is in needing original Wikipedia to be part of the loop at all. At best, beyond the training phase, it is all done on the fly. Bearing in mind it doesn't have to replicate what the Wikipedians think readers want, if what they actually want is even easier to produce using a machine.

At worst, if hosting an encyclopedia is a necessary evil, you fork Wikipedia and manage it in the best way for your enterprise, which will inevitably be radically different to the original. Since a big part of the killer's offering will be its speed of updating, the requirement to let others fork your fork, poses no threat to you.
Top

Everipedia's going to go bot crazy after inflation turns on.
Wikipedia Sucks! Everipedia doesn't and you can get paid! https://everipedia.org/wiki/lang_en/paul-bedson/

CrowsNest wrote:
Once customers are assured the result will be comprehensive and accurate, and most likely even neutral once the tech is refined further, then the demand for the often incomplete, inaccurate and biased Wikipedian derived knowledge disappears overnight. As such, where studies of Wikipedia's quality have been sparse, limited and even contradictory, stress tests of this tech will be widespread.

Thank you for sharing the link. As much as I wish that were true, I wouldn't 100% place my bets on it. Once corporations see the money in this for what it's worth, information will be controlled and published in favor of the highest bidder.
Top

We can probably call this idea Wikipedia 2.0, a potentially useful halfway house between the necessary step of killing Wikipedia, and doing away with the idea a knowledge base has to necessarily be a static centralised thing at all.